How this Import-Focused Shop Increased their Average RO by 66%

Dominic Lydon worked for a repair shop in Ireland before moving to the U.S., and then for a local Massachusetts dealership. In 2004, he founded Autobahn Service, specializing in European and import vehicle repair. Known as New England’s “VW, Audi, and BMW guy,” Dominic loves the challenge of automotive diagnostics and takes pride in providing a best-in-class service for Autobahn customers. The small-town shop boasts five service bays and three skilled technicians.

The Challenge
Prior to discovering Shop-Ware, Autobahn Service suffered through their fair share of SMS-induced pain points. With the busy day-to-day bustle of shop operations, it wasn’t always easy to send and receive approval for high-yielding estimates. Not only were they stuck in a cycle of low AROs, but they were also losing business to competitors. Autobahn Service needed a way to efficiently convert small-ticket oil change customers into a steady stream of more profitable jobs.

The Results
Autobahn Service was considering a competitive SMS before completing a Shop-Ware demo. The platform’s exclusive tools such as the GP Optimizer (which makes calculating a parts gross profit easier than ever before) as well as having the ability to integrate their Bosch Car Service dashboard, made selecting Shop-Ware a no-brainer for the Autobahn crew.

Following their gut paid off. Just a few months after going live with Shop-Ware, the shop was so busy with new jobs that they actually needed to lower their car count. This provided them with an opportunity to be more selective with the services they took on and profits soared. Additionally, by tapping into Shop-Ware’s digital estimating capabilities, Autobahn Service has noticed an 89% average approval rate from customers. 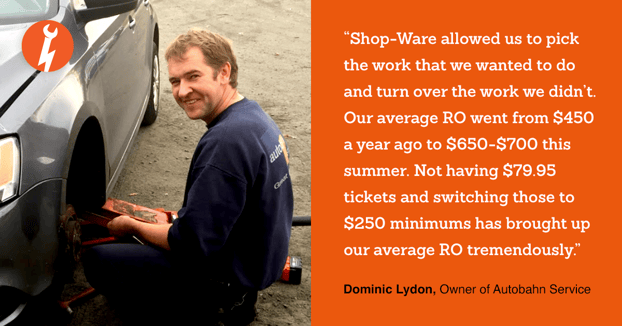 The Takeaway
Autobahn Service had struggled with time management and profitability. Shop-Ware has allowed them to streamline shop operations and work from a central database. The ease in communication has granted them more productivity, the ability to service higher ticket jobs, and an opportunity to showcase their value to customers.

*All images courtesy of Autobahn Service